On Saturday, December 15th, there was a big showdown at Roselle Catholic High School in Roselle Park, New Jersey, in the finale of the Hearts 2 Hands Invitational, between two of the Garden State’s powerhouse programs, The Patrick School & St. Benedict’s.

On the Gray Bees squad is one player that is known throughout the state, but unknown outside of it through the world of college coaches. He has plenty of promise & has the potential to land a Division I scholarship.

The player’s name is Zarique Nutter. He is a 6-foot-4 shooting guard that has plenty of skills on the court. His main specialty is scoring the ball. He has plenty of athleticism and can take the ball to the hole and even dunk.

When asked what motivates him to be successful on the court, he replied, “What motivates me is my mom, she motivates me, being a single parent. That just makes me want to go harder in what I do.” 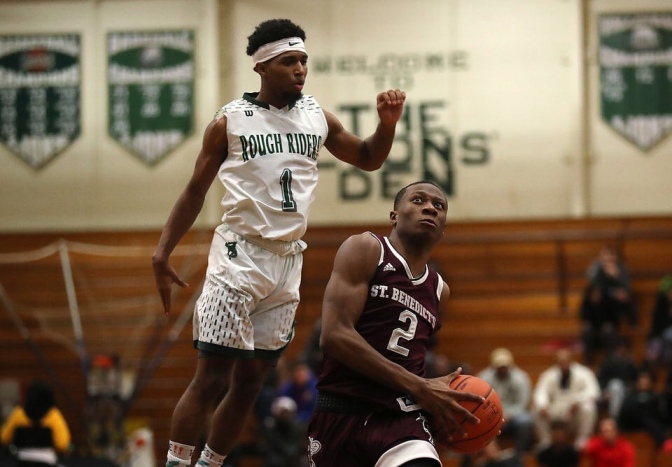 Nutter attempts to go up for a basket. (Photo courtesy of NJ Advance Media)

Nutter hails from Newark, New Jersey, a place where only the tough and the strong survive and where grittiness is key. The city’s nickname is called Brick City, because of the housing projects that were built in the 1970’s. When asked about being from Newark, he replied, “It’s rough, but, you gotta fight through adversity. But I feel like it’s an honor coming from Newark, New Jersey, because there’s a lot of good players, good players come from there, but not many come [out] to make it far.”

Like many kids from the Newark area and throughout the whole state of New Jersey, Nutter emulates Orlando Magic guard Isaiah Briscoe, the former McDonald’s All-American and Kentucky guard, who is also from Newark and and ironically went to St. Benedict’s as a freshman and sophomore.

“I like to watch Isaiah Briscoe, that’s my favorite player to watch, because he had a dog [mentality on the court] and the motivation. He never quit. You see, he didn’t get drafted, went overseas, now he’s in the League. He never quit, he just kept fighting, so that’s who I look up to when I play basketball,” he said.

Nutter first started high school at Newark Central High School. As a freshman, he averaged 4.5 points per game. But as a sophomore, it would prove to be a revelation that he was a force to be reckoned with. Last season, he averaged 14.5 points and 5.6 rebounds per game, as he led the Blue Devils  to a 23-9 record, a sectional title and an appearance in the Group 2 state title game, where they would lose to Haddonfield.

On his time at Newark Central, he replied, “Like Newark Central, it was an honor playing for Coach OG [Shawn McCray]. He gave me the spotlight to get my name out there, most definitely. Started out my freshman year, really didn’t do too well. My sophomore year, I came out and did what I had to do.”

This year, the Newark Central Blue Devils, were featured in the documentary, “Best Shot,” which is a YouTube original film, and was executive produced by Maverick Carter and NBA All-Star LeBron James. In the documentary, former NBA player and current ESPN broadcaster Jay Williams comes out to Central and mentors the players and serves as a big brother-like figure to the players while the public sees the trials and tribulations of all of the youths, including Nutter, and harsh reality of growing up in Brick City.

When asked about being in Best Shot and what he learned from Williams, Nutter replied, “Being in the documentary, Best Shot, was, it was a great experience. I learned from J-Will, to never quit, ’cause you know, he had his accident with the motorcycle, but he didn’t quit. He also taught me how to be a leader, most definitely, on the court and off the court.

In the film, it is shown that Nutter is the Division I caliber talent and is lacking exposure, due to the fact that Central doesn’t play in major tournaments or events. It is also shown that he is being recruited by big-time high school programs, due to his talent. There was one segment in the film, in which he faced a difficult choice, stay loyal to the program that nurtured him and his talents or go off to play for a powerhouse program.

In the end, the latter won out, as he made the choice to attend St. Benedict’s, which is a mile away from Central. St. Benedict’s Preparatory School is completely different than Newark Central High School in more ways than one. Central is a public, co-educational high school. St. Benedict’s is a private, all-boys institution. As far as the basketball was concerned, they offered something that Central unfortunately couldn’t, an opportunity to gain exposure and play in front of Division I schools and a national schedule.

On transferring to St. Benedict’s, Nutter replied, “I was at St. Benedict’s my eighth-grade year, I didn’t really like it. But then, you gotta look at the positives in the situation. You’ve got Coach [Mark] Taylor, it’s a great school and they put you in the spotlight to play like, other top competition.”

When asked how he likes St. Benedict’s these days, he added: “So far, I love St. Benedict’s, I love playing for Coach Taylor, Coach P, most definitely, I just love the coaching staff, they’re working on my body, just trying to get me stronger and develop me as a Division I athlete.

So far, the Gray Bees are 7-0 on the season, with wins over The Patrick School, The Hun School, Academy of the New Church and Upper Room Christian. They are on par to be one of the best teams in the state.

As far as colleges that have reached out to him, he said he has heard from Coppin State, Manhattan, Seton Hall and Lehigh. “It’s very little [attention], but I’m going to get it up there,” said Nutter about his collegiate recruitment.

In that game against The Patrick School, with a large crowd watching, Nutter was able to hold his own offensively, getting to the basket easily and even throwing down a couple of dunks. The promise is there. Very soon, the promise will turn into offers. Also, people won’t just know him as that talented player from “Best Shot,” but many will know the name, Zarique Nutter.