There’s nothing like a big-time basketball game in New York City on a Friday night. It is a sight that is worth seeing because there is always good action on top of the excitement that is built on top of it.

Last night’s thriller between CHSAA powerhouses St. Raymond of the Bronx and Bishop Loughlin was one for the ages. More than 1,500 fans packed the St. Raymond gymnasium, located in the Parkchester section of the Bronx to witness both of these programs do battle. The best part was the fact there were celebrities on hand, such as rapper and Mass Appeal Records recording artist Dave East and New York Knicks players Kyle O’Quinn and All-Stars Brandon Jennings and Carmelo Anthony.

A lot of hype surrounding the game was based on the matchup of both teams, which featured two of the city’s best guards in senior Isaiah Washington of St. Raymond, who is bound for the University of Minnesota and Markquis Nowell, a junior at Bishop Loughlin, who has been receiving plenty of Division I offers.

Both teams originally squared off at the Kreul Classic tournament in Coral Springs, Florida on December 17th, in which St. Raymond won a close game by two, 74-72. With that game fresh in the minds of both teams, this second duel would also be a close one as both programs went to war in the critically-acclaimed matchup that took place on Friday the 13th. It was an event that lived up to the hype as it was a game that required ticket sales, which sold out in less than a week. 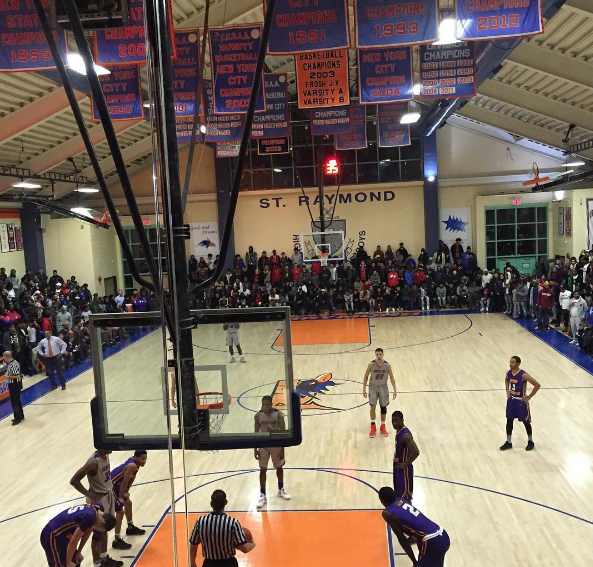 Loughlin came out on a mission, scoring on jumpers by senior Tyrese Gaffney and Keith Williams to give them a quick 8-0 lead with 6:31 to go in the first quarter.

But then three straight three-pointers by junior guard Omar Silverio brought St. Raymond’s up by one, 14-13, with more than three minutes to go. Then Loughlin got eight straight points from Nowell to bring the Lions ahead, 23-17, at the end of the first quarter.

The second quarter began the same as the Lions controlled the pace, leading 30-23, with 6:02 to go. The ball movement of the Lions was very fluid as they made the right plays by going to the basket and shooting open shots when needed.

The Ravens were flat and missing shots, for most of the first half, but they still managed to stay within a few points of the Lions. But a scary moment happened in the game in which Dallas Watson went down with

When play resumed, Nowell was unstoppable from three-point range as he hit three straight shots to keep the Lions ahead in the game. Although the Ravens hit some clutch baskets towards the end of the half, Loughlin would go into the break leading by eight, 45-37.

The second half started the same for the Lions as they took a six-point lead, 47-41, with 6:47 to go. But although the Ravens were down, they were not out as Silverio & Washington made two straight baskets to cut their deficit to 47-45, with 5:46 to go in the third quarter. Moments later, Silverio would bring the Ravens up two, 49-47, with less than five minutes left.

Then after that the Lions unraveled as the Ravens played tight defense and hustled on the boards and built a six-point lead, 56-50, with 1:55 to go in the quarter.

Loughlin would not stay down long as they ended up cutting their deficit to one, 58-57, with 6:59 left in the fourth quarter. In this final quarter, the game continued to stay close as free throws & clutch points were very crucial for both teams.

Throughout the later stages of the fourth quarter, Williams made crucial shots from the free throw line for Loughlin, but that would not stop St. Raymond’s from keeping the lead, due to their defense and hustle.

Then the tide turned as Washington hit a three-pointer with 1:05 left to give St. Raymond’s an 80-76 lead. Silverio would add another three of his own to give the Ravens an 83-77 lead.

Then another Nowell three with 34 seconds left would cut the deficit to three, 83-80. Another basket would be made by Nowell with 25.5 seconds to go to bring the lead up one, 83-82.

But the Ravens would have another chance to keep their hopes of winning alive as Washington was fouled with 14 seconds left, and capitalized on the opportunity by making both free throws, bringing the lead up three, 85-82.

On the other end, Nowell would draw a foul, and make both free throws, with 7 seconds left to cut the deficit to 85-84. But the Ravens would hold on for their second victory of the season against the Lions, which put them at first place in the Bronx/Westchester “AA” division standings.

Washington led St. Raymond with 29 points, 10 rebounds and 11 assists, while Silverio poured in 29 points of his own. Junior forward Darius Lee added 12 points for the Ravens. For Loughlin, Nowell added 33 points and 10 assists and Gaffney would add 18 points in the loss.

This game was a thriller for all people that were able to make it into the game and is one that will bode well for both teams as a prelude for what is to come during the later stretches of the season. Will there be a Loughlin-St. Ray’s III soon enough? That will be determined come playoff time in March. But for right now, the city will have to settle for the matchup that was in the Bronx on the hallowed night of Friday the 13th.